The colleagues at Omega 365 Consulting have an endearing name for Wenche Tindeland. They warmly call her, “Mother Omega.” In addition to being a department manager, she is an oracle who knows everything there is to know about the routines and rules in the company.

When we met Wenche at the Omega 365 office in Oslo, she had just come from a lunch appointment with a consultant who has been with her since 2007.

“This part – being able to talk to, and follow up with, employees and candidates- is the most rewarding part of my job,” smiles Wenche. She does that a lot. She generously shares her brilliant and winning smile, along with a rolling laugh.

“It’s important that we get out, meet, and follow up with both customers and our consultants,” says Wenche, who is very happy that after many years of Covid restrictions, they were last autumn finally able to bring together consultants at the autumn dinners around the country.

She emphasizes that dinners and meeting points are important opportunities for gathering people and following up with them.

“This way, we can detect whether there is anything to address, and our consultants feel they are being looked after,” added Wenche.

“We experience that the consultant is largely involved in creating their own name and thus ensures their chances of being included in new project periods with our customers. We have consultants both at home and abroad.”

Wenche is clear that Omega 365 depends on employee feedback to learn about things that can be improved and done differently, and at the very least - what works well.

“For us, it is crucial to listen to our consultants. Our one-to-one meetings provide the best opportunity to learn if we need to address something.”

Wenche believes it is essential that the framework and terms offered by Omega 365 are attractive so that they can continually meet today’s market demands.

“If it hadn’t been for our consultants, we wouldn’t have our jobs,” she says while emphasizing that there is a considerable difference between our consultants regarding how much follow-up they want. Wenche is currently responsible for 57 consultants.

Her journey in Omega 365

When Wenche saw the position advertised by Omega 365 in 1997, she lived in Bergen with her daughter, who was ready to move home to Vikebygd in the municipal of Vindafjord.

“I was hired as number 25 and came from a position as a financial manager in the fast boat division of the then HSD (Hardanger Sunnhordlandske Dampskipsselskap).”

In Omega 365 Wenche started as an  administration manager who ran payroll, and invoicing, spoke to consultants, made access cards, and everything in between. At the time, she worked closely with Arne Gunnar Habbestad, Trygve Håland, and Torgeir Fredriksen, who all contributed to bringing in customers.

Wenche has been part of an enormous growth and development. She started from going to consultant and candidate meetings with the then general manager, Arne Gunnar Habbestad, in the evenings with a private telephone, to today’s standard for all employees.

From 2004, Wenche went from the role of administration manager to becoming department manager. The administrative tasks became fewer, and the afternoons grew longer as the goal was focused on finding and seeking out potential consultants.

“We used the Word-of-Mouth method,” laughs Wenche. “At the time, many employees could recommend potential consultants. Much of this is done in the same way today, with the main difference being that we also have more digital channels today.”

“I am lucky to have some wonderful colleagues in Omega 365 Consulting who do the best they can for our employees,” smiles Wenche.

According to Wenche, Omega 365 Consulting has a significant advantage because there is a short path and response time concerning new contracts.

“The fact that we have a short distance in-house with our administration department, which contributes with salaries, business, and IT support, means that we get a good score with our customers. In addition, we are measured on response time from when a new position is announced to when we present candidates and proposals for a contract,” says Wenche.

“In addition, the project management tool Pims has played an essential role in building up the entire consulting business,” Wenche emphasized. 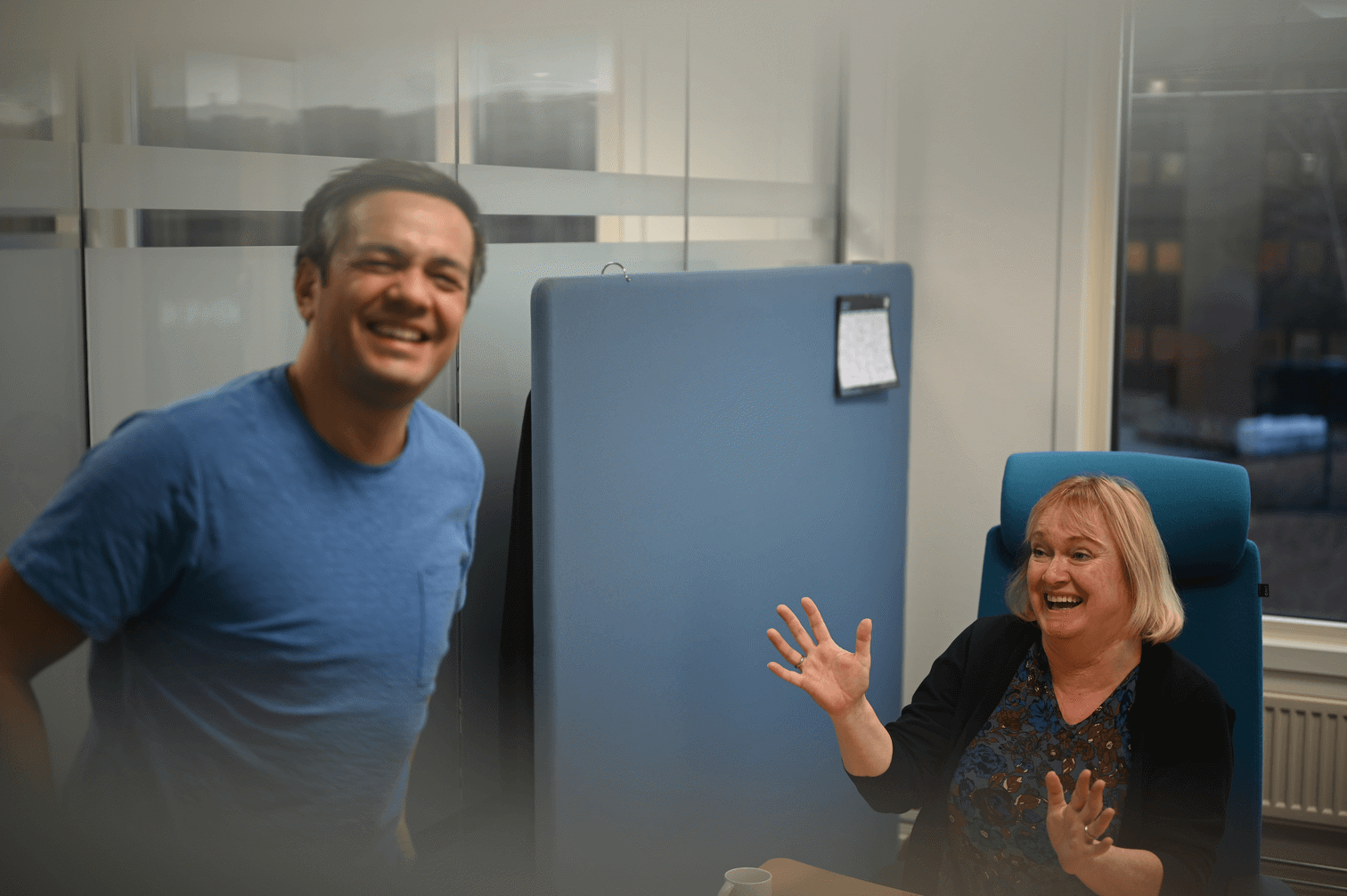 It is a good atmosphere in the office when colleague and head of department Arvid Grønvoll drop by Wenche's office in Oslo.

Contributions in her nature

Wenche grew up on the farm known as Tindeland in Vikebygd, in Vindafjord. She has an adult daughter (37) and two grandchildren in Bergen, and she tries to visit them as often as possible.

“They live too far away,” she says. But now she is ready to go home to her family for Christmas, and her holiday home that she has in Tindeland.

“I get everything ready, so we can enjoy Christmas together when the others arrive,” she shared. This is fitting since she likes to be in control, and is used to work.

“If I needed a workout, I would go out into the woods at home and cut wood. My father always said ’Gym? There is enough to do on the farm’,” she recalls.

Wenche found love again, which led to her moving from Western Norway to Oslo in 2013, and getting married. Now she and her husband live with their dog, a cockapoo, at Toppåsen, Rosenholm in Oslo near the border with Kolbotn.

“When I’m not at work, I go for walks in the woods and fields around Kolbotn. But it will be a lot of work - I can’t retire,” she laughs. She will be 62 in May and is not ready to retire.

“I would like to work until I am 67-70. I could probably imagine working until I was 70-75 if I had the choice - but I can’t scare the people in Ølensvåg like this. I don’t want to end up going by the nickname little raisin,” she laughs heartily.

She is not big on celebrating herself, but takes her work and family very seriously.

Her dedication to the job can be confirmed by a long-standing colleague and head of the department, Johannes Eide. He believes that some would even go so far as to claim that work was her only hobby for a long time.

“At times, it could be a little too much for ordinary workers,” smiles Johannes. He worked closely with Wenche for 2-3 years when he started in Omega 365 in 2009.

In addition to caring for everyone around her, Wenche is also a stickler regarding rules, hence the name Mother Wenche.

“She asked for it herself,” he says with a twinkle in his eye. “She is there for the customer, the consultant, and Omega 365. It is mutually beneficial for those who stand to gain from her commitment,” emphasized Johannes.

“She should be proud of the effort she has made in her 25 years here at Omega 365,” he says. “Although she has strong preferences for how things should go, she also keeps an open mind to those around her who think differently. It is a very positive quality,” concludes Eide.

Spotlight highlights and celebrates our team members and their efforts. We believe there are contributions, personalities, and developments throughout Omega 365 that deserve recognition and acknowledgment.
You may have a colleague who has made a breakthrough, improved workplace moral, or secured a client contract – we want to know about them and we want to celebrate them! Nominate a Spotlight candidate by sending your tips to lauren@omega365.com.